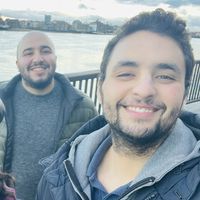 CURRENT MISSION
Travel and experience the world. Or in other words "make a FAT load of money and spend it on a trip for the rest of my life". ... Okay the real secret mission is "Find a unicorn, make them fart rainbows, bag them in plastic bags -you don't want to know how-, then sell them and use the money for tooth fairy hunting expedition.
LATER MISSION
I would be 60, I did my part in life, financially okay, quit everything in my life, go to a small town near a coast, somewhere cold but still warm in the summer -imagine Sicily, Italy-, open a small restaurant, where there will be no menu, you eat what I cook.
ABOUT ME
The nickname is Rozza -emphasis on the Z- , which in Arabic means a grain of rice, and if you saw me um 195 cm so that was an awful nickname to be called with, but it kinda stuck, and recently I knew that Rozza in some languages mean pink, so sometimes I introduce myself with Rozka to avoid being laughed at, it's a big mess! you can call me Mo. Anyways I like to think of myself as a pragmatic person, ready to try anything new, flexible, social with a wide circle of acquaintances, reliable, fun to be around, I'm told that only by seeing my face it's laugh provocative which I confirm that's NOT true!
PHILOSOPHY
I think it takes more than a lifetime to explore oneself, I'm still trying to really know myself, what I want with all this randomness,. And one -effective- way of doing this is by dropping yourself into new situations, new places, out of your comfort zone. Another way of doing it, is by never settling for half an answer, never settle for half a life, it's quite hard, I'm trying my best and I came in terms with the fact that I might never reach the end, so I'm trying to enjoy the journey as well.

HOW I PARTICIPATED IN
a backpacker with no CSing is no backpacker. - "Mohamed A Sallam" -yup I said that-
HOSTING
I hosted so far
~Pyoul and Nan (4 nights)
~Athina (10 nights) -not sleeping but everything else-
SURFING
Been hosted so far in
~Amsterdam (Ted - 2 nights)
~Ghent (Elza - 3 nights)
~Paris (Shobhana - 6 nights) -there's nice story in there, ask me about it if we ever met-
~Madrid (Joanna - 4 nights) -not sleeping but everything else-
~Lyon (Hervè - 1 night and Claire - 1 night)
~Bern (Fabi - 2 nights)
~Zurich (Jay - 2 nights)
MEETING
Alot, I can't even count, almost every city out of the 17 cities I visited in my last euro-trip I met people from CS whether locals by asking them to meet up or sometimes travellers in the hostels I stayed in.

New places, new -genuine- people, hearing their stories, their life experience, how they perceive life, what taught them lessons, what made them laugh, what made them cry!
Food and cooking, I see myself in 20 years a worldwide famous food critic sitting in the finest table in a restaurant, while the waiter is standing next to me shaking in fear from my opinion and tasting what is served and writing down my comment in a tiny notebook -Have you seen Ratatouille? ... yup Anton Ego that's him- .
Vintage things : including museums, art, churches, castles, anything old and has this smell of authenticity then um in.
Did I mention food? ... I think I did.
And of course, food.

MOVIES:
500 Days of Summer, The Book Thief, About Time, Into The Wild, The King's Speech, (Eat, Pray, Love), The Intouchables, Tracks, Amelie, Fight Club.
Tragic ones: Capernaum, Incindies, Where Do We Go Now?, A Hidden Life, The Salesman, A Separation)
SERIES:
Game of Thrones BIG -bit disappointed- fan, Scrubs, The Big Bang Theory, The Simpsons.
MUSIC:
24/7 listening to something, I'm caught up in piano (Ludovico Einaudi -my man-, Yann Tiersen, Hans Zimmer), Coldplay, Imagine Dragons, Dido, Alexi Murdoch, Johnny Cash, Radical Face, Stromae, Woodkid, Family of The Year ,... and alot more, you can call me a collector, I hear the song, I like it, then it's in my favourites, regardless of the genre -and keep listening to it till I HATE it-.
BOOKS:
Read novels both Arabic and English, specially the one that narrate the old ages, Youssef Ziedan - Azazil, Al-Nabaty and Mohaal, Naguib Mahfouz - Midaq Alley, The Beginning and the End, Paulo Coelho - The Alchemist.

IN EGYPT
~Dived near the blue hole (deepest point on the Red Sea) in Dahab.
~Roamed El-Karnak temple (the biggest in the world) in Aswan.
IN EUROPE
~Fought the temptation of the prostitutes in the Red District in Amsterdam -it's a hard thing-
~Became an expert in Paris metro system in 4 days, I even helped tourists choosing the right lines.
~Attended La Mercé Festival in Barçelona.
~Climbed -down :3- Grüten mountain in Bern.
~Got cursed never to graduate by doing the 3 steps of the curse in Padova. -it didn't work, I did graduate-
~Got caught by the police in Florence.
~Met the Pope in Rome ... okay fiine! just a wax statue of him.
~Got a BD cupcake from total strangers in Venice.

LEARNING
Anything you know and I don't, is a lesson I'll be glad to take.
I like to know how people live, what are their traditions, local cuisine, and rituals, what are the rules and customs that are unique to them.
TEACHING
I have been everywhere here in Egypt, and this comes with lots of stories and experience to tell, you get more stories from the people rather than the places.
Every one hold his own different world in his mind, the more diverse the cultures the more different these worlds get to be.
I can teach you how to fluently insult someone in Italian -like the continuous kind of insulting-.
Maybe how to stitch a wound!! , but wait don’t do that!
SHARING
the stories of my exquisitely simple, amazingly normal life!

~Arabic and Egyptian local tongue,
~Insight on how meticulously designed the human body is.
~My culture, Pharaonic, Islamic, ... etc.
~How to extract the real story from the locals rather than only sightseeing and hearing this repetitive story everybody gets to hear -a little tip: you can get the best stories from the guards that work in the place, thank me later-.
~We can discuss humanity in general, astronomy, theoretical physics, History -my favourite-, Politics -my least favourite-
~How to make green salad with love "like you never experienced before"
~How to cook new things, how to mix the things you love into one dish, hopefully it comes out a good thing.
~How to find apathy in the deepest pits of chaos.