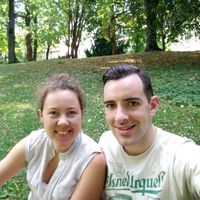 I'm Patrick! I've been on CouchSurfing since January 2009. It's been an important part of my life ever since then, especially while living overseas. I made a website to keep track of all my CouchSurfing experiences. Check it out! http://neasey.github.io

I work in Nijmegen as a structural engineer and help run an ultimate (frisbee) club as well as some other hobbies, see below.
I've lived in Nijmegen since August 2017.
Before moving here, I lived in my hometown of Hobart for most of my life. I've also lived in Dresden, Lund, and Hong Kong.

I eat vegan, if you're a potential host reading this then I hope it's OK with you. I'd be glad to cook something for both of us.

I don't really believe in using 'culture' based on your home country as an excuse for things. If something I do is common in my home country, it's because I have thought rationally about whether it's a beneficial thing to do for myself and/or the world, not just 'because that's what Australians do'. I would encourage everybody to examine and question their actions in this way.

I like genuine and personal conversations and experiences.
I like getting to know surfers, hosts, and people I meet at events, especially those with whom I really click.
I don't like disingenuous people, and I am pretty quick to recognise them.

The Millennium series by Stieg Larsson.
The Cormoran Strike series by Robert Galbraith AKA J.K. Rowling.

Learning enough Dutch in half a year to succeed in finding an engineering job in the Netherlands.
Hiking to the peak of Mount Scenery, the highest point in the Netherlands, on the Caribbean island of Saba.
Reaching Knivskjellodden, the northernmost point of Europe.
Being in Europe for 400 days.
Seeing many of the the biggest bands in the world at Rock Werchter, one epic four-day festival in Belgium.
Setting a world record among 6,346 guitar players in Wrocław.