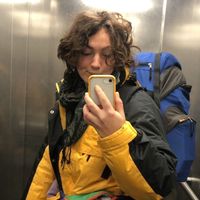 I've always been kind of a nomad, I love hitchiking and have hosted and been hosted by people I've met more or less randomly ! I believe energies always show us the way.
I like to move around but more recently, tired of institutions, I quit my school and decided to travel to Great Britain to reunite with my roots and my story !
I'm half french, half Irish/British, I was raised with both cultures but never had the chance to spend a long time over there so I'm looking forward to be integrated to the culture and to meet new friends !
I love travelling, meeting new people, discovering and sharing. You could say I've got a big hippie vibe, I don't believe in a materialistic approach of the society, I don't connnect with consumption, economy... I find meaning in sharing, feeling, I love nature, music, theater , art in general. I also like going out in parcs, having a drink at a bar, checking out expos and museums, making music.
By the way my main mission would also be to play music this year : I play piano and I sing and recently I've been really interested in Blues music, I think that's my thing ! I also have a didgeridoo which I would love to get good at !
Not really one to describe myself at best in writing but I hope you'll get to know me in real life ! ^^

I love meeting strangers and I think getting to know new people is a great way to fulfill your vision of life. Opening yourself to what’s unknown, uncomfortable, is what leads you to be creative and also sympathetic towards others.
I like to travel not knowing what's waiting for me and letting instinct and unexpected guide me through the trip, I believe energies help us find our way !
I always love to grab a beer or a tea/coffee, having nice chats, I like to party at times but I like to be cosy and quiet as well ! I hope to connect with you and become friends but I'm not waiting for hosts to keep me busy although I would like us sharing time together !
I like genuine and natural bonding and honesty is a must !

Hosted by those amazing people…

I went all the way from Brussels to Montpellier hitchhiking (in winter)
I love to sing and dance in the streets.

I can teach you a bit of french and spanish, I can also cook a nice dahl or improvised recipes (which usually turn out good my friends say) !

talk about the world, talk about life, get a drink, watch a movie, play music and sing
Teach you a bit of French, Spanish…
A nice veggie/vegan meal 🥘
A laugh!
A walk, a swim, a yoga session, a political debate(?), a party if we’re in the mood,…