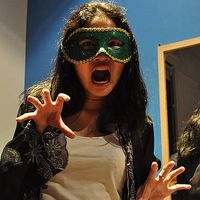 I'm an independent, easy-going, all rounder city girl who loves almost everything in this world. I appreciate the small moments of life. Grew up in Singapore and lived in the UK for a while and now permanently based in the US. Definitely looking forward to the next few years of my life before hopefully moving again!

I love American Football, Football and Formula 1. I am a gym addict... and I am still considering bungee jumping though but I need to steal some guts, could harvest some from Baumgartner, he's got waaaay too much don't you think???? ;)

Been to a fair number of countries but I definitely want to explore MORE!! It's okay to demand more from life right?? I'll have to start working OT and save stacks of cash before starting a RTW but right now.

On the "fun" side I am a HUGE movie buff and have a humongous passion for music! I looove watching movies at the comforts of home, on the bed, though some movies are way better in theaters especially when it is mandatory to watch it 3D or better yet IMAX!!!

I believe that all matter, energy, and life are an interconnected unity of which we are an inseparable part. We rejoice in our existence and seek to participate ever more deeply in this unity through knowledge, celebration, meditation, empathy, love, ethical action and art.

I'm sick and tired of hearing everyone's stories! *jokes* I want to tell my own. The only way to do that is to travel!! But of course the stories give me so much inspiration, so do tell prithee please!!!! :-p

I join gatherings, meetings and parties! I have been hosting or opening up my couch, ever since I moved to England! Now that I'm back in Singapore, I live with my parents, sooo.....

I became more aware or what's out there and from there I learn and put into good use to my future travels. But about the other activities and parties, I met FUN and AWESOME people!! They're SWEET AS!! (NZ Style!)

The friendships are unbreakable and the experiences are just unforgettable!!

I think right now, if someone were to ask me this, "What is the best thing that has ever happened to you?", I'd say "CS!"

I like to watch movies on HUGE ASS screens but well they're shown on TV faster than you think now. I like all kinds of movies from war films to comedy. One thing, I don't like horror/thriller movies! :/ Just to name a few awesome/favorite movies o' mine;

I don't do anything in specifics because I LOVE trying out new things and experiencing them!