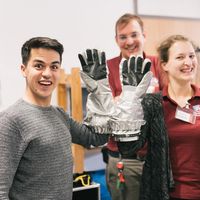 I am Ali, Originally half Russian half persian, born and raised in Iran, and now I work in Aerospace industry (e.g Airbus) as Aerospace engineer in Bremen, Germany. Aiming for going to space

I play piano and keyboard. But I listen to everything good.

Hard to say, but one moment which was definitely amazing for me was when I flew an old Cabrio aircraft and the winch cable broke shortly after take off ... oh yea, was a lot of fuuun