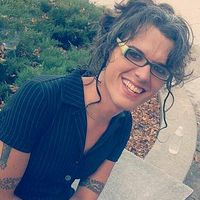 To find my place in a world not designed for me (as cliché as that is...)

I'n a recently indoctrinated philosopher specializing in Philosophy of Language and Feminist Philosophy. I traveled a lot growing up and have never really been able to stay in one place long, largely because I get anxious without regular changes of scenery (I have Asperger's, and have been told it could be related to that). I'm mostly just trying to decide how best to use my fancy-pants education to serve my communities right now. I'm a huge nerd and it's almost impossible to find something that doesn't interest me; my partner and I are both massive fans of horror movies and that's how I spend most of my time. I also spend a lot of time on computers, which I tend to trash regularly (I take apart the hardware and/or software to find ways to make cheap machines outperform high-end machines, but frequently it ends in failure before I have a breakthrough :-P ). Currently in Seattle looking for a place to stay permanently; came her to intern and be closer to my partner but housing prospects keep fallig through!

My personal philosophy is to never sincerely or seriously respond to folks who misuse technical terms like 'philosophy'.

Right now I'm looking for places to stay on the cheap or who will accept nonconvential payment (chores, favors, etc) while I try to set up a permanent residence in or around Seattle. I thought maybe once I got my long-term situation figured out, I'd probably set up a spare couch for others to stay on as a sort of Pay-it-Forward thing.

Not really done this much; probably my only real couch surfing experience was when my friends and I went to DragonCon a few years back, and it was a blast. I'm still pretty new to this, however; I knew this existed, and in grad school I always kept a spare room for people in need of a place to stay short-term (I was homeless once in college and got through it thanks to friends who had spare couches/beds for me to crash on).

Literally just about anything. I challenge you to find something I can't stay up all night obsessing over. Folklore is my main nerd thing, followed by horror and computers. But I'm not exaggerating one bit when I say I've never seen or heard of anything that I didn't want to learn more about.

Don't make me choose! Kurt Vonnegut was a father figure to me all my life (also the only fan letter I wrote was to him). Horror movies of any sort are always amazing, but I've a fondness for paranormal horror. Let the Right One In is one of the few perfect movies I've ever seen. Others are just about everything by Stanley Kubrick or Chan-Wook Park. Shirley Jackson is another favorite author of mine.

Musical tastes are pretty weird and random and tend to go in phases. Lately I've been obsessing over Nine Inch Nails for the first time in, like, a decade. My partner , Jennie, says she thinks my main criteria for music is whether or not it could be mistaken by neighbors for a computer's sound card frying, and an ex said basically the same thing, so there's that...

Jennie (my partner) says my life seems much more exciting/adventurous than others', but I don't think so. I honestly think that the most amazing thing I've done is having flunked out of every school I attended growing up and being labeled as hopeless only to finish a PhD and MA with a 3.8 GPA in less time than it takes many to finish Undergrad.

Given that I have a PhD in philosophy, I'm pretty sure that I'd be qualified to explain what that field actually is, given that everyone seems to misunderstand it. I'm also really insanely gifted with making random shit out of whatever I have laying around, which a lot of folks find extremely useful (it grew out of necessity, and that also seems to be the reason others like it).

Right now what I'd most like to learn is the difference between 'wisdom' and 'intelligence'. Beyond the snarky "Clerics use wisdom and Mages use intelligence" response my nerdy friends always give. A lot of people seem to treat these words like they pick out different concepts, but I've never in my life been able to find the relevant difference, beyond the fact that 'wisdom' seems to be a more value-laden term. Also, I want to know what folks think they're saying when they use the word 'natural' in its current colloquial way (e.g., "All-Natural Product!"), mostly because even some of the most gifted and qualified philosophers I've met have not been able to pin down what others mean by this use (I'm thinking it may be semantically/pragmatically related to many traditional beliefs of omnipotent creator-gods).