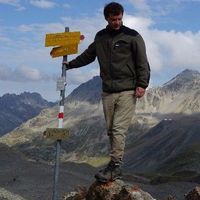 I would describe myself as a calm, tolerant, ecological, social and friendly person you can rely on. I try to see the positive things in life and try to live in the moment. A big thought in my mind is: Everybody wants change, but nobody wants to change!

Because it's a great idea! The only real social network!

- 2014: A hitchhiking trip through southern east europe with a friend! Will definitly hitchhike again!
- 2015: Roundtrip by hitchhiking and bus along the coast of spain!
- 2016: Workaway in Ireland for 3 weeks and afterwards a trip alone along the coast for 3 more weeks by bus.
- 2018/19: Year in Canada