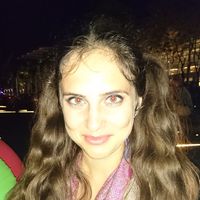 I consider myself a colorful creature, on one hand working intensively on my goals, and on the other hand, enjoying my free time passionately and tranquil. I don't have any regrets in life - each situation can teach us something. I believe that we all should be honest and kind to others, help when we are able to.

No flirty boys, please. I am really not interested in doing anything "for fun" - I am still one of those who believe in a true, old fashioned, love. For me guys and STDs are not like Pokemons "collect them all". Sorry if that is not matching your beliefs. Thanks for respecting it!

Besides the fact that CS is the best way to meet the locals and learn about their culture, or just to help someone stuck in your own country, let me tell you the story:

When I was about 19 years old, my best friend Igor and I decided to go to Italy for a week without any money. We made our bags full of cheap cans from the student restaurant, that was all we were going to eat. At some point, we managed to reach Venice. At that time, I made CS profile, but no one was accepting my request... I can understand it, as my requests were looking more like "can we sleep at your place" and it was the last moment. As the night was coming, I told Igor that we can ask random strangers on the street if they can host us (it was kind of a joke, but we still did it haha). Again, no one accepted (i wonder why :P). We decided to try once again. It was already around 10 pm. I saw the painter near the main square. I approached and literally asked him "we have no place to stay, can we stay at your place?". His answer: YES. Igor and I looked at each other confused. We asked Mr. Ian if he is serious. He confirmed and added that he lives somewhere out of the center, there is no electricity in his apartment, neither enough space. Despite the fact we were a bit scared, we went with him. He didn't have a lot, but he gave us everything he had - his time, his stories and his space. He even cooked pasta with tomato sauce, the only food he had. He hosted us for a few days. We left him all the cans we had in our bags. That was one of the eye-opening moments for me to realize how kind can people be. I went to Venice a few times after, and every time I would go, I would knock on his door, but he was never there. I would leave him a letter on a doormat. One day, I got the message that he moved from his apartment. I never again saw Mr. Ian, but I would like to. Moments like this stay forever in our minds and not rarely help us to define ourselves. It was not CS, but it is very similar to experiences from CS.

I am interested in many diff things and want to learn as much as possible.

Somehow I like more "darker" literature... I believe that sadness, tough times or beautiful love stories can inspire most of our creativity...

Movies = One flew over the cuckoo's nest, A beautiful mind, The pursuit of happiness, Gandhi, Avatar, The Lion King, Joker....... a looot.

- for me, it is amazing to sleep under the stars, in the tent...
- flew in a hot air balloon in Egypt
- ended up in favela's part in Rio de Janeiro - the police stopped all the traffic so that we could get out safely
- drank a bit too much wine (for me it is one glass

) and bought the ticket to Australia, Vietnam, Cambodia, Indonesia and Singapore

🏿
- met one of my best friends Mojca in US
- worked 17 hours per day, for 2 months, with 2 broken ribs, in US = not recommended haha
- spent a day in London and a night in Paris... watched the sunrise from the rooftop of some building
- for some people it is amazing that I worked for Game of Thrones (as a nurse) = for me - i didn't even watch it on tv

- explored caves in Croatia :)
- lost on the mountain in Vietnam
- been bitten by a civet in Indonesia
- doing safaris and diving is also amazing :)
(...)

Smiles, time, food, stories (i do have many hahah).