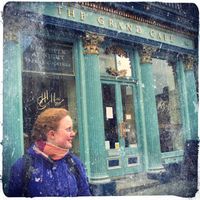 Learning my profession, being creative and getting to know a new hometown!

I try to be an environmentalist, a feminist, and a Christian. I do believe it's possible to be all those things at once, I just don't know if I live up to it. I don't know that I should have to, either. All in all, I believe in "live and let live", I suppose.

I haven't used this service before, but I've travelled around and lived in host families in several European countries, and I've found it to be an in-depth experience of cultures, travel and the lives of other people that you can't get any other way.

I love movies, music, books and comics. I also like knitting and singing, I like baking but not cooking, and, obviously, I love to travel. There's a certain peace of mind only achieved while watching the lights of the dashboard reflect in the rain on the windscreen, while you travel along the empty highway late at night - or while hiking across a valley with nothing man-made but the path ahead of you, and nothing else behind.

I'm an avid reader of everything from George Orwell to Ian Fleming, from Kafka to Marvel-comics. I love going to the cinema; the genre is of little importance as long as the movie is well done. I listen to Rufus Wainwright, Håkan Hellström, Florence + the Machine, Veronica Maggio, an, of course, The Boss.

I have trekked by foot to Stonehenge and I have trekked among Swedish mountains. I have walked on the Via Appia. I have sat in silent prayer with 50 000 other people. I have celebrated Easter with the Russian Orthodox church in Moscow and celebrated New Years Eve on St Peter's Square in Rome. I have sung with choirs in Cape Town, in Reading UK, in Uppsala and in every city I've lived in. I've seen The Boss perform - thrice! I've seen a cow's calf being born. I've heard the laughter of my nephew. I've skied in the Italian Alps and swam in the Indian Ocean. And I've only just begun.