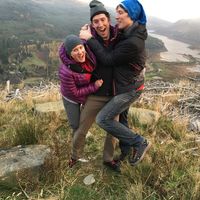 Meet cool people from all around the world

I'm a web application developer by day.
I love skiing and wish I could do it more.
Interested in cultural exchange in all forms.
I grew up in Texas and moved to NYC in 2009
Met a girl and followed her to Seattle in 2016

I'm Agnostic. Disinterested in politics. Astrology is B.S., but I can tolerate it if you want to talk about it. The universe is mostly deterministic. I have no respect for any religion that doesn't respect that I don't respect it.

I participate by showing people around NYC and offering my spare bed to crash on for a few nights.

web applications
other cultures, the more exotic the better

I ate a raw quince once.