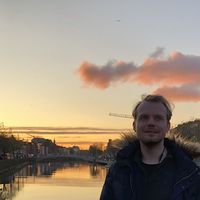 When I was a student, it was easy to say I’m just a student. Now I’m still a student, but I work 1000km from university. If you want to ask how, I don’t know. When I figure it out, I’ll let you know.

I’m also a part-time traveler;) but now I mostly visit family and friends around the world.

So in a year, I’ll try to finish studies and use that time to travel as break from work:)

I believe in an idea and want to embrace it. Especially now, since I don’t have much time for traveling, it’s perfect opportunity to host:)

Music:
everything except Hip-Hop and Country, recently mostly electronic, rock and indie.

Books:
Lord of the Rings, Foundation

Hitchhiked from Poznań through Amsterdam, Antwerpen, Paris, San Sebastian, Hossegor, Würzburg in 9 days with my friend having 140€ in our pockets.

As I'm Polish, some regional alcohol, my specific humour:)

And couch of course:)