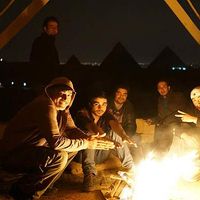 ABOUT ME
I am a Global Citizen, easy going and interested in meeting new people from different cultures ,visiting new places.
I lived in 5 different countries and spend most of my life traveling, I traveled around Europe &amp; now am living in the States , since I was young I meet people from almost everywhere on earth.
I believe we should live our life to the fullest.
I love sports soccer, horse riding, and scuba diving
My passion is writing but, I also did photography and had 1 exhibit in Cairo 2011 and 2 in New York City 2014-2017.
I hate stupidity, lies, cheating, and fake people.
In between animals I would choose a dog or a horse to be around as I will never feel bored around

Ask me anything else you would like to know coz am still discovering myself.

while the sun sets here it shines somewhere else.

If you believe in some thing, you can reach it.

i knew C.S. by a British friend i met in Hurghada while I was diving ,she was broke and i wonder how did she came Egypt without having any money , then she told me about COUCH SURFING

I met Stacey from the states in Cairo and we had a lot of fun as we watched the moon eclipse together from Cairo tower then we went for a drink and then we rided horses in the pyramids ... WE HAD A LOT OF FUN

I organized a big event at the pyramids when the three planets were aligned over the three pyramids , a lot of couch surfers were there and we had a great time togther , it happens one time each 2757 years !!

I went to st. catherine mountain with couch surfers and it was gorgeous moment watching the sun rises over these mountains ...

interested in creating new things , could be a story or desgin of a house .

LIFE for me is all about creation ...

diving in the redsea -traveling around Europe i stayed in 5 countries - riding horses in the sea -sailing in a lake in Sweden- fishing in the ocean - camping in the desert - exploring New york city studying film making in new york film academy.

well , i can teach you how to desgin your own house and make good plans for business
what i would like to share is my stories i write ,photos I took and some experince in life
we can also play some games , if we have nothing to do
i can also teach you how to speak arabic !!

i can show them around the city .
Set a plan for them to see the most in a short period
let them have fun during their stay