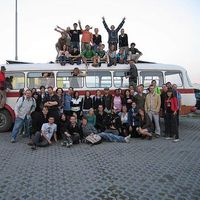 Errr... I'm bad at this so I'll keep it short until I find a better way to introduce myself.

Still haven't found a better way, sorry... But I may want to add that I like meeting new people with new ideas from all around the world. For myself, I'm quite simple and easy to handle.

"Whatever you do, don't hit the blue~"

After the first two months of not being able to host after joining CS, I'm happy to say that my couch is ready for you all! To tell the truth, I've already had the first guests staying over. Sorry to say, you won't be the one to CS-deflower me! ;)

Basically I surf and host. Which I'm best at? That's up to you to decide.

Being a student leaves me with just a limited amount of free time, but even if I'm not able to show you around I can help planning your daily trips. I should be more available on weekends as i always try to find time for parties and clubbing, but don't nail me on that one since we know, everything can happen!

I did mention my hobbies somewhere already, didn't I?

There's photography... traveling (obviously)... anime and everything that's got to do with Japan... and probably some other minor stuff I can't remember atm.

I'm interested in pretty much everything I've never tried before, just name and I'm all ready to jump into action!

I like all kinds of music (Pop, Dance, Rock, Classical sometimes, J-pop and J-rock, etc.)

I'm not that fond of Movies, simply because they cannot entertain me long enough. Prefer watching tv series.

Books are nice! I like them! One of the best decoration stuff you can obtain for your flat!

Surviving in this cold and harsh world might count as one amazing thing for sure... otherwise...

There's nothing in particular... I could teach you the basics of Go or show you how to make some delicious Hungarian food maybe?
Learning? I'm baaad at learning, neverthless I'm interested experiencing new things. One thing I have to learn for sure in the near future is Japanese.