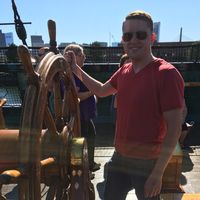 Born and raised in Washington state. I’ve been living in Portland Oregon the past two years. I have two roomies at the pad. Derek and I are airline pilots and Nelly is a flight attendant from Germany. We would love to host some cool people this summer! We live on a floating home near downtown Portland and the marina is right across the road from a lightrail station so getting around is easy. Keep in mind that we are gone often for work so there isn’t always someone here to host. My work schedule usually keeps me away two weeks straight then I’m home for two weeks