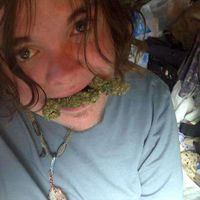 Captain. to be able to live any lifestyle and transition smoothly from one to the next. also to be self sufficiant. Creature. to have an adventure and learn something every day.

Captain (Shane).according to most people I am a pretty cool guy. I don't cause drama, I don't steal I don't fuck up peoples lives I don't vandalize things much, I don't stab people in the back I'm not unnecessarily violent or brutal. I and love to lend a helping hand to other people, I like to give alittle something tothe kid on the corner with a tattered cardboard sign when I have it to spare because I've been there and know for a fact that that kid probably isn't making much and he's probably in need of something to be desperate enough to put themselves out there like that, it takes some courage and despartion to fly a sign. Also I love handing out nugs to random stoners because pot is very medicinal and mary jane should be shared. In my past experiances a lot of people think I might be easy to take advantage of at first, but I'm also smart enough to know the truth in the saying that you can't help others unless you also help yourself and although sometimes I give people the shirt off my back I don't want to be the one begging for a shirt later. I don't enjoy panhandleing and will not do any form of it (flying a sign, gas jugging, spanging etc) UNLESS I HAVE TO. And believe me, I have HAD to before in my life. I love nature and I try to my best ability to love life for whatever it brings. I'm pretty smart, and really quiet most of the time, I like to oserve my surroundings and it takes up a lot of my brain capacity. Some people think I'm wierd cause I don't talk but if you're a cool person I usually warm up to one or two word sentances lol I love being silly and I'm a very funloving person, and eventually I will warm up to showing a person that side of me, but promise I'm not one of those quiet people you have to watch out for, i just think its very helpful to keep my mouth shut most of the time hahaha. When I do talk though I am very honest. My name is captain because road dogs of mine started callin me that because when I do say something it is always true. People that know me well come to me for advice when they really really don't know what to do. The only way people usually know that I'm not just plain dumb is trial and error. They may come to me for advice and choose not to listen, in the end its their choice and have zero control. But, if say they should do something or not do something its almost always true because I catch things that many others would have miss so I tend to be closer to having all the pieces of the puzzle. I love music, I love to party when around people I am comfortable with, only drink occasionally (used to drink A LOT) but I am admittedly completely and utterly 100 percent total pot head. I would not be the man I am today without sweet Mary Jane... And my wife of course, can't live without her, she and I are extremely united. We've been through a LOT together in the five years we've been married and I don't think I could have overcome all the obstacles of life and conquered the adventure of everything in the last five years and learned and grown without my wonderful crazy wife Creature by my side.
Creature (Brittany). Friendly, helpful, emotional, passionate, intelligent, talkative and a good listener, mature, empathetic, also a pot head for medicinal purposes. I am an artist. I paint and draw mostly but I love working with just about any medium I can get my hands on. Pottery, sculpting, you name it. I've even had a few experiances creating stained glass. I love reading and I usually end up starting and finishing a book on the same day. I like writing too. I am completely unmaterialistic, have been known to give away all my possessions and have on more than one occasion given away hundreds of dollars to friends and even strangers that "need it more than me." I have a lot of "mental issues" and I've had a lot of experiance that most would call traumatic. I don't think about that the way most people do. I think that they're gifts, and without all of my issues I just wouldn't be me. I embrace all my imperfections and all my traumatic experiances. Without them I don't know who I would be. A lot of times I feel the need to explain myself. I don't know when not to do this. Its just me. I love nature and animals. I like going camping. I've been "homeless" since I was fourteen and I'm not yet used to living in a place. I'm getting better at it but I still enjoy the simplicity of having no possessions except the pack on my back. I love my husband, we have been through a LOT together. I probably wouldn't be alive without him.

Captain.
The meaning to life is Burp and fart. Eat, shit, sleep, wake up. Life is as simple as that, why complicate it?
Creature.
Everything and everyone is a shade of gray. There is no pure evil and there is no total good. Its all somewhere in between. Its what makes life so beautiful.

If we have a couch, surfers are welcome. Currently we're kinda out in the middle of nowhere in a studio apartment motel. No couch here, but if anyones even around this tiny place, there's a floor you can make a nest on for a few nights. Also there's a large possibility we'll be surfing again here soon.

Although we're new to this website and haven't hosted or surfed via it quite yet, we're no stranger to couchsurfing or hosting couchsurfers. We've stayed on a lot of peoples couches, spare bedrooms, floors, driveways, back yards etc etc. We've also hosted quite a few people. We lived in a rental house ajacent to a railroad siding, which is where the trains stop for a bit to let oncoming trains pass by, and a prime place to hop frieght. Every once and awhile we'd see a train kid sitting by the tracks waiting for one to side or see a kid jump out of a stopped train and we'd always go out to the porch and holler "Oye! Come over here!" And we'd feed him/her and let them hang out and crash om the couch for a night or two. We once owned a trailer in Rogersville Missouri right next to a major highway and every once and awhile we'd spot a hitchhiker walking down the road. We'd rush as fast as we could to offer him/her a place to chill and get a bite to eat.