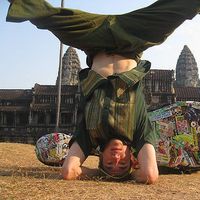 Joey Chang aka CelloJoe is an anomaly in the world of cellists.

Utilizing only his voice, a cello and a loop pedal, he is able to take listeners on a sonic journey around the world and to far away galaxies. Without using any pre-recorded samples, CelloJoe is able to record live on the spot with a looper and produce intricate intergalactic tapestries of harmony, melody, and rhythm as well as mimic many styles of music from dubstep to folk to rock to classical to hip hop by beatboxing, throatsinging, singing, plucking and bowing the cello.

CelloJoe is the world's first long distance musical bike touring cellist.
In 2007-2008, he rode with the pleasant revolution, a 5,000 mile bike tour from North San Juan, California to Palenque, Chiapas, Mexico.
In May 2009, he did a 500 mile bike tour through Utah with SHAKE YOUR PEACE!

i have mostly surfed. thailand, belgium, many places in europe.

i've ridden my bike to mexico from northern california..with a cello on the back of it!!! Also five months of traveling through Europe with the pleasant revolution: pleasantrevolution.net