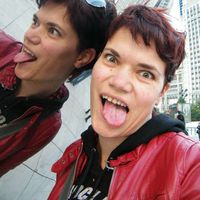 I travel by myself and people say I'm brave, but I think I'm  simply crazy because no sane person would quit a job and go traveling, spending savings like there is no tomorrow. So do not take me as an example or a role model, boys and girls ;)

The other day in Kansas City (MO) I spent a whole day helping my host's sister move to another place, carrying boxes, chatting, having fun. When I was in Ottawa, I accompanied my host to Ikea because he needed to stack up on Swedish food. In Grand Rapids (MI) I spent most of the time with my host who also happened to be an artist and we drew, painted, talked art and got inspired.

Guess I'm a new breed of a taveler - I enjoy hanging out with my hosts more than anything else. I've already met a lot of awesome hosts (and surfers alike) who were friendly, welcoming, awesome. I hang out with them and had a blast with them and every one of them was a reminder that traveling is not about places, but about people you meet.

I've seen and experienced a lot with CS, both good and bad, and I would not travel any other way.

Traveling, reading, listening to music, writing, drawing, being a nerd learning about interesting facts from history, science and future technlogies...

And have I mentioned traveling?

Off the top of my head:

MOVIES
Honestly, I'm not so much Hollywood movies anymore. It's mostly one cliche after another, the stories always following the same chain of events. It's simply boring. But maybe I'm the only one who feels that way - when I tell people I don't like Avengers: Endgame, they look at me like I was insane.

However, I do love animated movies: How to Train Your Dragon, Kung-Fu Panda, Zootopia... oh, and Lion King!

Well, I can listen to anything except jazz.

Linkin Park (only Hybrid Theory and Meteora), Muse, 30 Seconds to Mars (only their first hree albums, then the music went down the hill), Hurts, Train, Florence and the Machine, etc...

Alchemyst, Ordinary Wolves, Martian, Devil in the White City, The City of the Century (yeah, you guessed it, I love Chicago), The Wool...

Naw, I'll give you more:

- SEEING NORTHERN LIGHTS in Alaska! And again in Yukon Territory. And Spitsbergen.
- Experiencing the polar nights roughly 1200 km from the North Pole.
- Visiting Alaska and Yukon is a chapter of its own and I miss it!
- Spending one week in a log cabin off the grid in Yukon with no wifi, no electricity, with temperatures as low as 0 °F
- Traveling all 50 US states
- Making my own glass pieces in a glass-blow workshop in Yukon
- Stepping out of my comfort zone and going on a road trip in a camper (I'm a city person, that's why it was such an adventure).
- Buying a sling shot.

... and many, MANY more! Thanks to all my hosts who have made my trips one unforgettable adventure!

I can share a handful of traveling stories, a pal to watch tv with or sing from the top of my lungs to a rock song, but don't ask me to cook - I only cook in self-defence :D