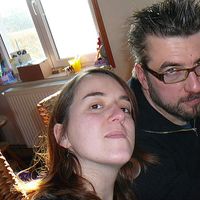 He host more than we travel. Hosting is a way to travel :) I am also a "greeter" for tourists.

We spent holidays in Brittany where we "surfed the Couch" of several people (CSers, family relationships...). And we hosted several people since November 2009.

many sorts of music ! I have hundreds of CDs. I love musical movies. I am an enthousiast reader, I like teanager books (I work as a librarian in a secondary school).

I went on stage a few times during concerts, to sing in front of thousands of people !