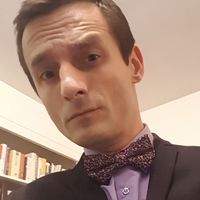 I have no idea... It's probably better to have a look at the comments couchsurfers wrote about me... 🏳️‍

"Nothing is funnier than unhappiness" and "Ever tried. Ever failed. No matter. Try again. Fail again. Fail better." and lots of other quotations from the books by Beckett. (second degree is crucial!)

I spend my time teaching English... That's my job. I love listening to music, going to the cinema, dancing, reading, travelling, good wine, ...

May 1998, during Janet Jackson's concert in Lyon, she chose me to climb onto the stage. Such an amazing and thrilling experience!