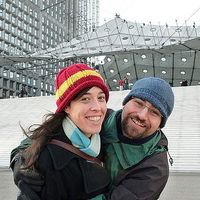 We're two 35-year-old Californians who have had a two-year adventure in Bonn, Germany. Prior to that, we had a 7-month jaunt in Lyon, France, and have traveled a bunch in Europe. Looking to explore this hemisphere for awhile with our young kids.

C: I've surfed solo for three weeks in Korea, for four nights in Mexico City, three nights in Russia, and have met a bunch of people here in the Bay Area, France, Germany and elsewhere.

R: Together, we've hosted hosted an American couple while here in France and they returned the favor in February 2009 at their new home in Germany. We also couchsurfed together in Lyon, Marseille, Strasbourg, Stuttgart, and most recently, Ensenada. Also, I've surfed solo in Dublin.

Our favorite things to do are cook, eat, drink (wine and beer mostly), play board games, and generally just relax and enjoy ourselves.

TV : The Daily Show, The Colbert Report, Lost, The Office, Flight of the Conchords, The Wire, 30 Rock, Caprica, Battlestar Galactica

Cyrus is always up for bike rides, beers, and tacos.