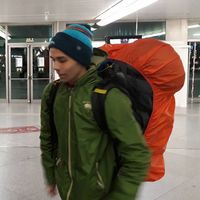 I am from Spain and I love travelling. I left Spain for first time when I was 22 and since then I have lived in different parts of the world and I would like to keep living like this for some time. I speccially want to travel around southeast of Asia, all around America Latin and visit Africa at least once. I want to see different ways of living but specially the ones that are close to the nature. I am sociable and really like talking when I feel confortable.

Because I want to travel but not like a tourist. I want to really feel the place where I am and there is no one better than someone who is from there.

I lot of kind of music (no disco music) and many movies (Cafarnaum, Cidade de Deus, Schindler's List, The Shawshank Redemption...). Now I try to read every day but I would have liked to read many more books... (The Godfather is my favorite at the moment).

Live in the jungle.

All what I have learned travelling. I like deep conversations about life.