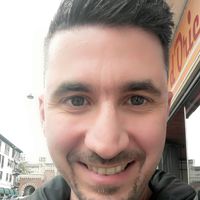 I am a shy guy but at the same time extroverted when I close my loved ones and friends ... I hate hypocrisy and prejudice because I like to evaluate people based on their behavior and not of preconceptions. I'm unprofessional singer and cooker ....I like sing italian song with guitar and with my friends....I like to cook sicilian food... I like dance latin music or disco music. I like watch sports in tv and football is my favourite sport.

I like to play sports and watch sports on TV, going out with friends for a drink, read books, listen music , to speak with my international friends with social networks,
relax on the beach or in the rocks near the sea etc

I like different types of music (italian music, pop, rock, latin music) but I do not like electronic music, house, techno. I like sing italian song with my friends. I like to read books in sicilian dialect (Camilleri) but also I read some scientific and humorous book. My favourite movie is : La vita è bella di Roberto Benigni

I slept on the beach, I saw a person who has slept with his head in the garbage .

I would like to speak about sicilian culture, sicilian food, sicilian history...I can teach to cook sicilian dishes.I like sing italian songs....I like to do massages. I would like to know new cultures..new languages...

I can speak about my city:Marsala, the most populated town in Trapani district and fifth in Sicily.Marsala's origins are tied up with those an unusual archeological site nearby, the island of Mozia, an important colonial stronghold of Charthage in North Africa.The town is famous for the landing of Garibaldi on 11 May 1860 beginning the process of Italian unification and for Marsala wine.Marsala was european wine city 2013 and this wine is considered one of the 4 best dessert wines in the world.Sicilian cuisine is the expression of the culinary arts developed in Sicily since ancient times and is closely linked to the historical, cultural and religious island. Sicilian desserts are superlative. Sicilian Cannoli are tubular crusts with creamy ricotta, is made from sheep milk. Sicilian cassata is a cake with ricotta , sicilian granita and sicilian ice cream are excellent.
Frutta Martorana are almond marzipan pastries colored and shaped to resemble real fruit. Salty food are pani cunzato, arancina, caponata, sicilian pesto, busiate(typical sicilian pasta) with sea food or with swordfish and aubergine, cous cous with fish......I stop but the list is infinite............