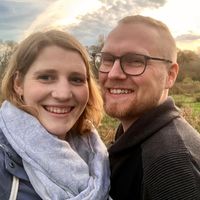 I used to be a kiwi (NZ citizen), hence the unusual name: German citizen since 2017 and my actual name is Julian!
Originally introduced by a travelling girl from New Zealand, I quickly fell in love with the couchsurfing way of travelling and experiencing cities.
I met many very interesting characters and some of them even were my own guests, and yet I have made almost no negative experience in.. wow, 6 years!

Now that you know how I became part of the community, here's why I stayed: I received so many kind actions, gifts and words that I'm in debt to repay by hosting, showing my town and washing dishes for at least a century :D

I prefer film and ambient music, if I have to listen to a radio station its usually classic or alternative rock, but no bands stick out. My wild days of concerts and being a fanboy are over ;)

The medium of movies never really got me, I do not like to go to the cinema and I am very picky about series and movies. Currently watching the expanse.

Watching the stars on a mountain in Slovakia, showed by an outstanding host.

I'm kinda cool! Trust me! Oh, and I can offer a helping hand in your household. Actually, I have two of them.