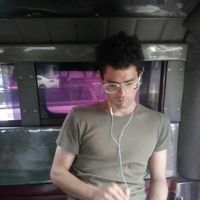 I probably ask a lot of questions, and I'm a pretty open book.

After growing up in Miami, I lived in New York and Paris for several years before spending some time in Melbourne and settling in a couple of cities in Asia (Taipei and Shanghai). After circling back to Miami, I'm going to California for school as an older person.

I've been on CS since 2007 and through the site have met some of my best friends, including my adoptive family in Taipei.

I'm not sure how amazing this is, but wrapping organic chocolate on my feet, one bar at a time, for eight to ten hours a day in Melbourne, Australia, was something of an experience.

I'd be happy to help with language practice!

I probably enjoy hearing stories more than most people do, which motivates me to do my best in telling good ones myself, even if I often fail.