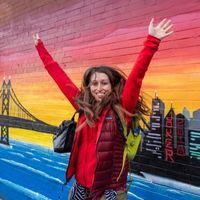 This is, not, the dress rehearsal.

I'm interested in meeting people, most people. Travelling has always been on my agenda having something of a nomadic childhood between the US and Scotland and other places, I like the outdoors, cooking, running, yoga, bouldering, and most kinds of tea.

Acknowledge that fear and doubt exist and choose to move forward anyway.”

“the only people for me are the mad ones, the ones who are mad to live, mad to talk, mad to be saved, desirous of everything at the same time, the ones who never yawn or say a commonplace thing, but burn, burn, burn like fabulous yellow roman candles exploding like spiders across the stars.”
― Jack Kerouac, On the Road

Be the change you wish to see in the world-- Gandhi

I've surfed a couple of times, neither time was intricately planned but all have been lovely experiences that I'll never forget... I've hosted friends from couchsurfing but i suppose that doesn't count. I was working in a hospital in a more or less rural area for two years, which was not on the rador for many potential couchsurfers.

Always been good so far, why stop now...

All sorts of music, post rock- 65daysofstatic, explosions in the sky, god is an astronaut, god speed you black emperor, mogwai, this will destroy you.
and also folksy stuff like ani difranco. and manu chao. some rock.

Books- On the road, the dharma bums..anything by jack kerouac.

seeing the moment the sun set on the highest point in Rio during carnival. from everyone oohing and ahhhing and making music and being happy tipsy. to the moment of silence as the sun went down...