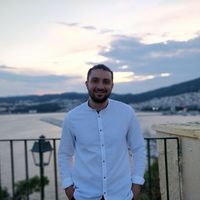 Easygoing guy and honest, I like meeting new people from different countries and cultures.

I am currently live and work in Edinburgh. I studied Information Management in Greece.

I signed up when I was searching for shelter while traveling with my bicycle from Amsterdam to London.

I could listen to different genres of music such as funk, jazz, classical (mostly late 18th until early 19th century), electronic, eclectic contemporary and also I enjoy ethnic music.

I generally don't read books, but I read a lot of articles mainly on Reddit. Also, I am an Imgurian.

I volunteered to build an community center for Syrian refugees in Kavala. After that I decided to have a road trip from Kavala, Greece to Amsterdam, then bought a bicycle and started to ride towards London.

I could teach some vegan recipes if you are interested.

I could share information about Greece, Scotland and suggest places to visit.