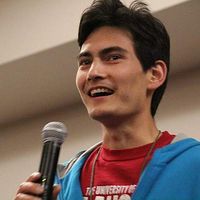 I have a BA and Masters of Law from France. I love learning languages and meeting people while traveling. I've studied in Wuhan, China for one year while in high school, one year in Oklahoma (USA) while in college, I've spent two months in Belgorod, Russia in 2015, and worked 7 months in Xalapa, Mexico ultimately; I am now headed to Marseille, France to work a year at a refugee center.

As an experienced wwoofer (wwoofindependents.org) I really enjoy meeting locals who can share their views on the city/region they live in. It's just nice to know someone who can show you around or tell you where to go. I usually cook because to me it's the best form of sharing, but I've been giving chinese lessons and massages during some of my stays!

Movies: just any, but really much comedies such as The Fearless Vampire Killers or the Monty Pythons' movies... and SF like Gattaca, Cloud Atlas, Elysium, Oblivion;

I've done five weeks of wwoofing in the US in Oregon, five weeks in Russia in farms around Moscow, and five weeks in Salvador and Panama, I truly enjoy organic farming.

I flew a plane around mount Saint Helen's, that was quite something...

I have good history/politics knowledge and study law.