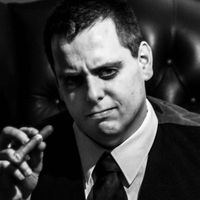 I'm a guy, born and raised in Antwerp.
Living in my own apartment together with 2 lovely Greyhounds, who are my pride and joy.
As part of my hobby, more on that below, I travel Europe quite frequently, though mostly within a days travel, but hey with good reason, I'll go everywhere.
I've spend a long time in Antwerp's student life, sometimes even still go to events, which resulted in quite a network of young friends.
Every time I travel, I always end up meeting new people, and I love it.

I've moved into my apartment a few months ago, and though I have the company of my 2 black beauties, it's always a joy to host some interesting people.
If I get the chance, I'd love to travel some more, maybe for longer periods, and having a way to cut on lodgings, would certainly help in that.

I've already mentioned my 2 Greyhounds, and as a hobby (not for money), I also race them in the amateur competition which is held on various tracks in Europe.
Also I love to hit the slopes with my snowboard, and I try to have a snow vacation in the Alps at least once a year.
Avid football fan, supporting my local team Royal Antwerp F.C., it's also helpful that their stadium is literally just around the corner.
I also enjoy gaming quite a bit, and am a big fan of "The Legend of Zelda" series. I even have a bit of a geeky outlet in that as I started quite the collection on that.
Not a complete nerd, I always love to just go out and have a drink in town, and know a few places where you can just have a good night.
I love to cook as well and since cooking for people is more fun than just for yourself, you might have a chance to experience my cooking skills.
One of my more guilty pleasures is that I love to sing, I sometimes even record and share with friends.

I enjoy a wide variety of music, mostly rock, going from the more poppy stuff to pure metal.
Movies, the more fictional genres like Sci-Fi and Fantasy are things I always like, as are epic adventures. I also have a soft spot for animation, brings out the kid in me :P
Not too keen on books, I can't focus on still text long enough to actually finish one.

A few years ago, I was at Rock Werchter and lost my friends in the crowd. Since roaming the terrain on your own isn't all that, I decided to get one of those free boards and wrote something on it. Usually you see love declarations to some band, free hugs or jokes about some of your mates on those, but I decides to write "Free massages" on it. Well during those few days I met quite a lot of people from all corners of the world, and my friends also found me pretty quickly when they've lost me. It was pretty innocent, all people got (men and women, didn't discriminate), was a quick neck and backrub, so nothing sexual or anything.
Nothing to amazing yet there, but while I was roaming the field with my sign, I suddenly got noticed by a reporter. She got my number and we arranged an interview later that day. Few hours later, there I was, live on national radio, giving this reporter one of my massages, and the whole country could hear she quite enjoyed it :)

Well I have quite the experience in several areas, all of which I'm willing to share.
First of all, since I'm born and raised in Antwerp, I can give you the grand tour, customized to anyone's interests (if I know them up front off course).
I can also have you experience some of Belgium's popular delicates, like chocolates or beer and know some good places to enjoy them.
I'm also an experienced snowboarder, so if there's snow around, I'm always willing to teach you what you need to know to get down those slopes.
Don't know how to cook? Well I do and am willing to teach my knowledge.
Lastly I know 4 languages, though French and German can still improve, and I'm always willing to aid you if you're interested in learning.

Myself, I'm always looking for some new experiences and interested in learning about the places I am.
Love to learn to play music as well, I got an ocarina of a friend once, but still struggling a bit with it, and also would love to be able to play the guitar.

Well I covered quite a bit of what I can share in the section above. I'm pretty much an open book and will answer all you wish to know.