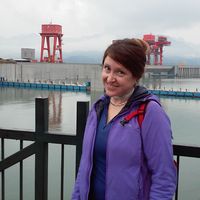 Back home! My last year has been filled with travels and memories from Europe, the camino in Spain, heat and humidity in SE Asia and the beauty of New Zealand.

With couchsurfing it all started when .... my sister and I were roommates while we were living in Kalamazoo, MI as well as New Haven, CT - and we got along great while hosting surfers. Then I decided to leave my sister behind and move to Boston for a job. Go crazy, eh?

Anyway, my sister and I have traveled extensively together over the last few years. Heck, we even convinced our brother to travel with us for the last 8 years - who else travels regularly with their siblings? It's an awesome experience, that's for sure. And it has worked out well for us - we've met some great people, seen some amazing sites, and had a really good time. When my sister was doing research in Huelva for 6-weeks, I went to Spain to experience the culture and cities and travel in Spain with her. Of course, that meant doing some walking around the cities, visiting the city center, biking the itty-bitty streets, and maybe even walking to the mountains and back.

And I do love a good story. If you want to share your stories with me, I'll grab a drink and get comfortable. Whether it's drinking water, juice, coffee, tea, wine, beer, or something like whisky and scotch - these are all good options, too.

PHILOSOPHY: In the last few years of traveling with other people, I have spent more time traveling by way of talking with fellow travelers. Each person has their story, their plan, their travels. I think it's great to sit down and chat with someone to hear where they are going and what they are doing.

Detroit Couch Crash rocked! I was in the greater Detroit area for the Detroit Electronic Music Festival over Memorial Day weekend. I met a bunch of CSers from Chicago, Ann Arbor, Detroit - it was great! They did a great job of coordinating events, including Urban Spelunking and even hashing! And then the Electric Zoo in NYC - met some more CSers in Central Park for a picnic and then went dancing for 7+ hours!

And the Boston CS group is great, too! I have been to a meet up at the Cambridge Brewing Company [CBC], a tent camping weekend on Cape Cod during the 2010 summer, and most recently a potluck with delicious lasagna! More recently, the first annual Boston Couch Crash was held here in the city. It was a great time and I met a lot of awesome local and traveling surfers, too. We did some sightseeing here in Boston, including a bar crawl and even visited a dive bar in Southie, courtesy of a great Irish guy!

Spain has offered some wonderful surfing experiences. In Madrid, I surfed with 3 other surfers and had a great time drinking beer and chatting about our cultures. In Galicia, I learned so much about their heritage and history while walking around town and chatting. In Barcelona, we met up with tapas, wine, and cava to talk about traveling. In Seville, we chatted on a terrace about hitchhiking! It's been great.

Near Boston, I spent a whirlwind 24-hours couchsurfing on Cape Cod. It was awesome. I love the openness that CSers bring to all their experiences.

COUCHSURFING EXPERIENCE: I finally surfed in 2009. It was his first time hosting surfers and he did a great job! I love how organized he was about making the arrangements and getting everyone organized.

While in Raleigh, NC I surfed for a night and had a great time checking out a few bars, museums, and even a couple of thrift stores. Plus - tons of bbq! Love it!

I surfed in Chicago and got to spend one fun filled night checking out Wrigleyville. Plus, my host Ryan introduced me to a specialty liqueur called Jeppson's Malort. It's a Chicago delicacy and you should try it if you are in town.

While I was visiting Boulder in August 2011, I surfed with this fabulous couple. Since I was working, I would park myself on their porch to do some work, chat with them over coffee before they would go to work and then head into Boulder to sample some delicious, local beer.

Finally, I went to Cape Cod in October 2013 and surfed with a native cape codder. My hostess Mia is an amazing woman who made my whirlwind trip to the cape a great experience! From October 2013 to June 2014, I was regularly hosting people in Boston - which can be challenging with my crazy schedule.

After leaving Boston in August 2014, I was traveling with friends, family and a good mate from couchsurfing - Brian. Brian and I traveled for four months together and it was fantastic.

I love science. I'm a biologist at heart, moonlighting as a chemist. I like to read. Volunteering is an important part of my life. I am the social coordinator for my friends - I send out the emails and try to get people to get out of their houses and have fun in the world. I am organized - I could almost be a secretary since I enjoy it so much. And I do love a good plan - I've heard that some people don't tie their shoes without a back-up plan. My family has a great sense of humor - although it can be a bit dry, I've heard. And who doesn't love a good story? I love stories - I can certainly talk off your ears with enough time and enough caffeine, but I love hearing a good story. Heck, I will even listen to 'okay' stories if the timing is right. And I have become an avid hiker the last few years and have been focusing on getting as many four thousand foot peaks in the White Mountains as I can. I climbed 3 mountains: Mt. Rainier, Mt. Adams and Mt. St. Helens in Washington State. I like walking around cities and seeing the architecture, the stores, and the graffiti [aka street art]. Plus, I walked a section of the Camino de Santiago in northern Spain (in October 2014 - I walked the whole route this time!). It was amazing ...!

As an avid reader, I have difficulty pinning down my favorites. I did enjoy "Radical Evolution" by Joel Garreau and "Lilith's Brood" by Octavia Butler. One of my favorite, although disheartening, books is "Brave New World" by Aldous Huxley. Plus, I really enjoy talking about books and the ideas presented. I am part of a few books clubs and like to hear other's views on how a story was written and why... and since I was commuting to my two jobs, I was listening to audiobooks. This helped me calm in Boston traffic (which is stressful to drive in!) and educated.

Movies. I do like film festivals. While I have not been to Sundance, I would like to attend. In the meantime, I am looking for local film festivals - if you know any good ones.

Mountaineering! Climbing mountains that are right next door to each other: Mt. Rainier, Mt. St. Helens and Mt. Adams. Talk about a wicked good time, but also phenomenally challenging. It will push you to your limits. Plus, the White Mountains in New Hampshire have afforded me hours and hours of hiking, camping, and beautiful scenery.

I am a very basic cook, but I don't mind doing dishes. I love eating out, trying new foods, and drinking a beer or two. I also like talking about beer - much like wine aficionados will talk about the flavors and nuances of their favorite varietal, I strive to learn more about the subtleties of beer especially after visiting Belgium. So many delicious beers. Good work, monks.