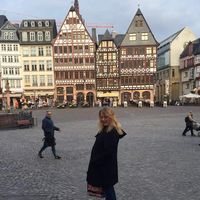 I am a long time couch surfer (since 2014) and had several references, however my account got deleted because of inactivity earlier this year. I was verified under the old CS website as well, but I'm not paying $60 to do it again. I don't have much if any culture Shock from being in Germany. I can speak German zuhause.

I'm a German-speaking American that likes to visit germanic Europe. I say my name in the traditional German way. I am not your typical US-centered American that thinks the US is better than everything and everywhere else. Quite the contrary (doch! Das Gegenteil!) . I'd emigrate from the US in a heartbeat with the opportunity. No, half a heartbeat. I sell government health plans for a Krankenkasse in the US. I'm also a cashier (Kassiererin) at my local Supermarket. I'm a classical musician with many years of orchestra experience (Bratsche, Cello, Kontrabass and more). I am a big follower and supporter of natural and integrative health care. I'm active, like to go out, go on walks, trying new things, have fun, don't mind staying up late. I live like a 30 year old. I'm not a typical representation of my age, so don't despair. You would never guess my age, except it says it on here haha.

To make connections in Germany and in other German-speaking countries, and develop possible future work and living opportunities. I love Germany!

I'm a classical musician, but like many kinds of music. That cello photo in my Profile isn't Jacqueline Dupre', that's me in the orchestra at my Lutheran church. Yes, I'm Lutheran (Evangelisch).

I like German films, French films, funny films, and historical films. Also, Proms like BBC Proms or Neujahr in Wien.

For books, I like non fiction. Particularly autobiographies and wellness books. I also like the typical things they teach Germans in school, like Karl May, Brecht, or Schiller. I want to read more German literature, not just the newspapers :)

I was in Wittenberg, Germany in 2017 on the 500th anniversary of the protestant reformation (31/10/2017, which incidently was made into a national holiday in Germany) and read out the scripture at the English service at the Schloßkirche Kapelle. I even saw Angela Merkel exit the main service. There were so many cones and Polizei there, it was hard to see close.

Oh, probably even more impressive is I passed the C1 Goethe exam in Berlin in 2019. Man, that whole day was hell and I will never forget it.

You can help me with German words and I can help you with English words. If CS locks my profile again, you can reach me at johanna.w24 [at] gmx.de . That is better than text, because I can reach that account with only data, if necessary.

good times, cooking at home or going to an Imbiss together, wine, board games, spazieren gehen, classical music experiences, auf den Weihnachtsmarkt gehen (in der Weihnachtszeit), fun and funny browsing sessions while we laugh together. Gemütlichkeit! If you read this far, I challenge you to ask me about a German word I mentioned in my profile, should we meet up.