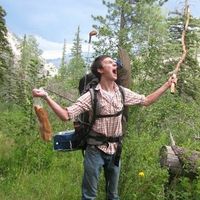 The one thing that is absolutely important to me in life is humor. I always try to make people laugh and I expect them to do the same. I am always seeking adventure but I hate people who say that in their "about me" description. It sounds cliche. So instead I will say I am always seeking something new.

I feel as though if you had to associate a philosophy with me it would be jokes. I am constantly trying my hardest to make people laugh because that's when I am having the best time. There are times for serious discussion but a serious discussion without laughter is just a bunch of pretentious assholes sitting in a room smelling their own farts, and let me tell you, my farts stink and you don't want to smell them either, so let's laugh!

I have now officially hosted more people than I have surfed with! I really enjoy hosting people, it is like travelling without having to leave your house. I think what I enjoy the most about couchsurfing is the unique and instant friendship you receive when you surf on someone's couch or your host someone. Everyone is so kind and I can't really think of another scenario in life where that happens. I love couchsurfing and I am not afraid to say it.

The first place I couch surfed was in DC and it was absolutely awesome. I might never stay in a hotel again. It has the comfort of staying with a friend and meeting someone new. The only thing I enjoy more than surfing with other couch surfers is actually hosting them. I get to show them into the world that is John Kelly and show them what Flagstaff has to offer. I might be the best tour guide in the city but I am not sure.

I am currently studying Political Science and Economics at Northern Arizona University. I play jazz, watch a few TV programs a night, and take an active participation in living deliberately. I am currently President of Model United Nations at NAU and lead a group of 30 across the country. I am always up for stupid ideas that will make good stories.!

Midnight in Paris, Fight Club, A Beautiful Mind, Into the Wild, Barton Fink, and Toy Story 2 was okay.

1) I went to DC in a weekend with a hillbilly, a bimbo, and a dog named Anus
2) I met Richard Anderson, former Under Secretary for the Department of Defense and he bought me some wine. I still think he was trying to get into my pants. Although, I was wearing shorts.

I am active in political and international affairs, I am constantly looking for issues in the world that I can help solve. I try to read as much history as possible so I am as informed as possible. I know how to play jazz sax pretty well and I know a bit about Jewish Culture!