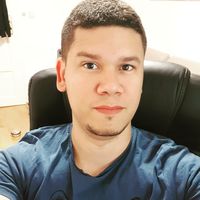 Easy going person that try to think of the good things around.

Help anyone with small things at any time of the day. I believe that is how we change the world, no need to freeze and think of master plan.

Living in Germany since the beginning of 2016, first in Hamburg but currently living in Munich, from September 2017. I am also exploring and learning about the city.

I go to the gym some times, not a frequent event though ^^'
Here in Germany I got a new hobby: Fußballkicker

I dance a Brazilian dance called Forró. Do a search about it, you will find out about the best couple dance ever.
I can teach you the basics and also some cool tricks.

Although I can dance, I am still a bit nerd, I hope you don't mind :)
Some times spend a whole day playing Civilization in my computer, I watch some animes and I play Magic the Gathering quite often (a card game) with colleagues from work.

I believe that talking to people and learning about countries by the perspective of those who live/lived there is the best way to acquire high quality knowledge.

I believe that learnign about countries and cultures from the people you meet is the best way to get knowledge on these topics. The Information coming from other sources than people, who actually experienced it in person, are often too artificial or misleading.

I have hosted around 80 couchsurfers. I traveled through Germany and Poland for two and a half months with the help of amazing couchsurfers.

Couchsurfers are in average people that are over average ^^
Unique styles and perspectives everywhere.

A little of everything, but I one of biggest hobbies is dancing forró listing to its music when dancing.

When working, I usually listen to Heavy Metal though.

The 10 months I lived in India!

I can teach Forró steps and teach brazilian portuguese.
I am fluent in English and I can speak almost fluent German.

I can teach forró, portuguese and samba.

To cook something for you

how to solve Rubick's cubes and Juggling :)