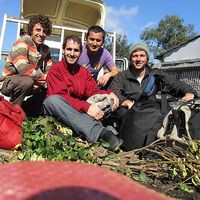 I've been out of the CS loop for a year or two but I'm getting back into it.

I live in Girdwood which is technically part of Anchorage. The wilderness is my refuge from all the human madness and drama; mountains and trees don't seem to have an agenda. All the same, I really enjoy people. I think one of the biggest reasons problems arise is because there's a lack of perspective, so I'm workin' on wearing as many shoes as possible. I'd like to say I'm a social chameleon of sorts as I feel at home with the miners at the dive bars to the freaks at the festivals.

Alyeska resort is down the street so let me know if you want to hit the slopes!

Everything to be done with style.

Hosted many people and had a blast doing it! I was able to catch a few couches on a few road trips and did some more hosting as I finished up school. While living in Chile I was able to do a bit of both and during a 5 month voyage around South America I was able to meet a few more folk. If I have a couch, your name is on it.

Hosting my first guests and assuring them my pet ball python was sweet, friendly, and NEVER escaped from her cage. The next morning she had found her way into a boot. Go Mr. Murphy and his law.

I enjoy being conscious and when I've had enough of that, I enjoy thinking critically and discussing history, politics, philosophy, music, or any other engaging topics. I'm pretty active and like to run, swim, bike, hike, snowboard and shenanagin. I'm a beach kid (don't surf) and love exploring new places, especially if there is a challenge in the exploration. I'll enjoy a good craft beer, glass of red wine, or even tea. I'm always looking for little known micro-breweries and dive bars. I've brewed a few styles of my own beer; probably one of the more satisfying experiments I've undertaken. Drumming is one of my true loves. I always strive to get off the grid and while weekend trips are great, it's all about the extended voyage.

Good rock and roll (such as rock n' roll), jazz, blues, folk, and much much more! I'm really stubborn as far as the tunes I listen to but have recently been able to branch out to some hip-hop, trust me, this is a big step. I don't get to watch many movies but "Apocalypse Now" is pretty awesome, which leads me to my favorite book "Heart of Darkness". Although, "The Electric Kool-Aid Acid Test" and "Fear and Loathing in Las Vegas" give it a run for it's money. And as far as life-changers go, Eckhart Tolle's "Stillness Speaks" has belittled the ego.

I'd consider it stupid at the time/marvelous looking back on it. Hiked 14 miles in Glacier Park wearing Jesus sneakers.

Biked from Nederland to Aspen in late October through snow and freezing rain.

Teach? I can probably give you useless bits of history and music trivia. I find personal discussions have been better than any lecture from a class.

Due to the fact that I live in the U.S. my views on many foreign issues are definitely biased thanks to our glorious profit-priority media. I wish to learn the truth through my own, raw, experiences...gonzo style.