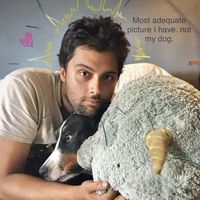 Heyo. So I do leftist video games. Currently working on a Palestinian skating game. I'm trying to give VR devices to artists for them to help do 3d modeling with.

Been reading a lot by black authors and civil war historians, since like August 2020. Also have read a fair bit on the far right. There's an Indian version of that, and I grew up with some of it, and became very far left.

I can talk a lot about pop psychology, including Quiet, about introverts, Hyperbole and a Half.

there are some webcomics you should know about:
Dumbing of Age, Atomic Robo, Vattu, Lucid TV
and, begrudgingly, I think Rick and Morty is a real effin good template for scriptwriting and deserves to be emulated if you're trying to make mass media stuff

I lived in the woods outside Berkeley and SF for a while, after a west coast bike trip, and spent most of my time in writing in starbucks and whole foods.

all the above pretty much. I can cook, give you a guest room, show you around town with a second bike, a lot of stuff.

I usually have with me some kind of VR device so you can play with that, Half Life Alyx, and 3d drawing in VR.