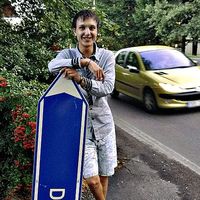 I fell in love with traveling and exploring mainly because of my dad, with whom we visited most of Europe. So, maybe also because of this, one day, I decided to leave my home and fly to the other side of the ocean: New York, U.S. and Vancouver, Canada. It was difficult to get around at first, but luckily, I tried Couchsurfing and local people always helped me a lot. I became independent, it was the best year in my life and it changed me more than anything else... In September '11 I went back to Prague and back to my old life, but I continue traveling to this day! In September '15 I went for a student exchange program and lived for 6 months in Tokyo, Japan. In September '19 I went for an internship and lived for 10 months in Wageningen, The Netherlands.

MY MISSION
I really want to experience as much as I can. The Earth is a huge place to live on and I know that no matter how hard I try, it is just impossible to 'do it all'. But, let's just say that at least a half would be nice! :D

I simply can't say no to anything new and interesting.
I love talking deep. Or weird. Not small.
And I really enjoy living in an unordinary way.

PHILOSOPHY
"do whatever you want, unless it harms anybody else"

Couchsurfing literally saved my sorry ass, when I was new on the New Continent! I had two wonderful surfing experiences, one in New York, the other in Vancouver and I'll never forget...

I felt that I need to give back to the community, so I started hosting in Vancouver, even when I was 8300km away from my home and both me and my surfers were enjoying it!

All this made me understand that even the smallest act of kindness can make a huge difference, so I try to keep that up :) And now it's even easier, being back home...

My biggest interest is LIVING. Then:

This will be totally unfair, because favorite-feeling is extremely dependent on the current mood. But I can try to write the names that really mean something to me, just to create an idea ;)

MUSIC BANDS:
System of a Down, Dr.Peacock, Massive Attack, The Sickest Squad, Mindless Self Indulgence, N.O.H.A., Rage Against the Machine, The Chemical Brothers, IAMX, DJ Massouille, DJ Radium, Enter Shikari, Captain Beefheart, The Residents, Pendulum, Prodigy, Muse, The Offspring, Ayreon, Pink Floyd, Supertramp, The Doors, Joy Division, Nick Cave, The Subways, King Crimson, Lou Reed, Patti Smith and many many more, including some Czech bands you wouldn't know and the Classical music as a genre itself. My favorite composer is Antonio Vivaldi because I used to play the violin for over 6 years.

Seeing System of a Down live show?
Exploring Pripyat and Chernobyl power plant?
Climbing to the top of Nara Dreamland's abandoned rollercoasters?
Walking around the edge of the Great Wall of China on a completely frozen ocean?
How could I compare it?
I can't.

Well, how could I know, before I meet you?

Teach me anything you know. I love learning. If you're passionate about your interests, that is a good start for any interesting discussion and I just can't get enough of those! :)

I go out quite often, especially to enjoy music and beer, so you could join :)

ALWAYS REMEMBER: One HP (Horse Power) is equal to the power of constantly working horse, which is, yoked in a driving wheel, lifting a cargo of 180 pounds (lb) and makes 144 circles per hour, 12 feet in diameter :)

NOTE ABOUT ME: I love to randomly make up stuff, multiple it several times, add something here, something there, and, as a result, create holes in space-time continuum by creating the biggest nonsense ever :)