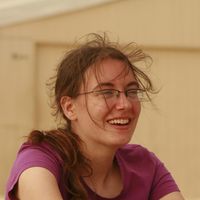 First up: I do not accept couchsurfing requests of people with an empty profile. Couchsurfing depends on trust and I like to build my trust with a profile, where I can get a first picture about a person. Due to the facts in the profile and the message you send me, I can decide if I can and want to host you.

Now about me:
I love to learn new languages and with it the culture of the country where the language is spoken. I love to experience new stuff and I am hardly ever saying no to anything. If I don't like it after I tried it, well... at least I tried it and formed my own opinion about it.

I like the idea to get to know locals and learn from them. You have the possibility to get to know someone in an unknown city. I like that. And mostly it's the people you remember, not the city, so I guess I like to remember better with people?
Every person has a unique story to tell, why not share it?

And I also like the events from couchsurfing - one of the main reasons right now, why I am on couchsurfing.

Music. Definitely music. I love to sing and dance. A while ago I started with the most amazing dance ever (in my opinion) - Lindy Hop and through that I got to know many more Swing Dances, that I often enjoy dancing. Right now only restricted to my living room, but still a huge part of my life.
I sang in choirs for almost most of my life. But right now I just enjoy singing with friends or alone in the kitchen while cooking dinner =).

I also like to play the guitar from time to time - although right now I rather spend my time dancing. And playing guitar got a bit neglected over the last couple of months.

Other than that I love sailing. Sailing on a Tall Ship is one of my favourite things to do. One gets to know people from all different parts in life (it's just a bit like couchsurfing, just with more movement due to the waves and less city). You get on board and know hardly anyone you get off board and you start crying, as you grew together during the time on board.

Music: I listen to many different kinds of music. I enjoy classical music as much as singer-songwriters or metal. Due to my dancing I listen to a lot of swing music and blues, but I also like to dance through the kitchen while listening to pop on the radio.

Movies: I don't watch that many movies, but if I would have to make a list, there would probably be a lot of Disney movies on it. And dance movies. Like Vaiana or Ballet shoes. And basically everything that has good film music.

Books: I read every day. To wake up and fall asleep. It's a nice ritual. As I read a lot, there are many good books I came across. If I have to name one my favourite, maybe "Water for the Elephants". Or when going by the feeling after reading the book, then my favourite books are the ones, that leave me happy and surprised after reading it and a bit sad, because I finished the last page.
And I shouldn't forget my all-time favourites: the Harry Potter series. I can reread them over and over again and still encounter new things happening, that I just overflew the last couple of times =).

Crossing the Atlantic ocean with the Alexander von Humboldt 2. Just the crew, the sea and some whales in the water. I never knew, that another ship or a boat could become so exciting, and that I could get along with so many different people on such a small space for such a long time.

Teach: Lindy Hop or any other Swing Dance. Baking, as I love to bake and eat cheesecake (win win for both of us ;) )

Share: A lot of experiences (did I tell you about sailing yet? :) )

Laughter. Food. Stories.
(Depends from where I am coming and where I am travelling to next.)