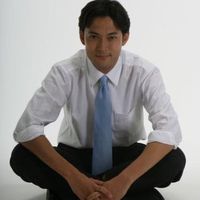 Born and raised in Tokyo. After having been to more than 80 countries and studying in New York and London, started a company and now stuck in Tokyo.
It's always nice to hang out with people from the world. Hope this nightmare of Corona ends soon and Tokyo would be lively as it was.

People on CS are very liberal and open-mined.
For a person who is living in a feudal society such as Japan, meeting people from CS makes feel I am the citizen of the world.

Phantom of the Opera
EVITA

All kinds of musicals.

I could wake up at 630am this morning!

Problems are not stop signs, they are guidelines.

Bringing people to Shinjuku, Roppongi and Ikebukuro. No worry, of course I treat you drinks.
Golden Gai, where 300 bars in 500sqm is one of my most favorite districts in Japan.