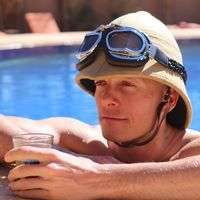 I work as a software engineer in Zürich, Switzerland. I did not travel at all while I was studying, so now I have to catch up :).

Since I started traveling in earnest in late 2008, I have spent over two years on the road. I've ridden a motorbike across Vietnam, slept in the Brazilian jungle and driven a compact car halfway around the world during the Mongol Rally 2010.

My first host Mac was so kind as to let me sleep on his couch on extremely short notice when I was traveling across Florida on motorbike, and I have tried to host people in the same positive spirit ever since. So far, I've hosted over one hundred surfers from thirty different countries and territories.

Besides regularly hosting people when I am in Zürich, I also participate in CS events, and I organize events from time to time such as our famous rooftop terrace BBQs.

If you send me a couch request, please mention why you want to stay with me. Last-minute requests are welcome (actually preferred), but do not send requests more than two weeks in advance. You'll only be disappointed if my plans change. I don't mind if you have no references as long as your profile is nicely filled out.

I am addicted to knowledge in all forms.

Climbing to the very top of the Todra gorge in Morocco and enjoying the amazing view and the feeling of having conquered something big. It's hard to describe, really, but I think now I know what drives people to climb mountains.