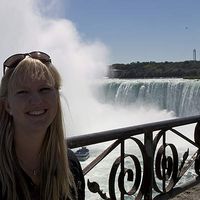 I was on exchange in Canada in 2013/2014, where I used Couch Surfing for the first time and I really had some good experiences. It was also during this year that the travel bug bit me and I have been under its influence ever since.

Be open-minded, curious and spontaneous

I've travelled a little while I was on exchange in Canada, but haven't been able to host yet.

Food: I enjoy good food made from natural ingredients and drinking wine or a nice cocktail
Being active: running, doing yoga or hiking and skiing when travelling
Movies, books
and of course having fun with friends fx dancing

Movies:
- The Untouchables
- Salmon Fishing in the Yemon

A canoe/camping-trip in Algonquin Provincial Park, Canada in the fall. The trees were absolutely beautiful and we slept beneath the stars. I don't think I've ever seen that many stars! (Sep, 2013)

3-day trip in Banff and Jaspar National Parks in Alberta, Canada. It is the most beautiful place on Earth that I have ever experienced. I also got to see a black bear and a grizzly bear. Everything about the trip was very spontaneous from the booking of the trip to being asked to go skiing one day and ending up having fresh powder in May. (May, 2014)