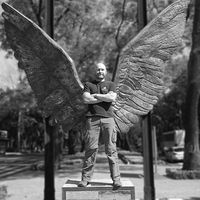 I'm a 32 year old guy, recently back in Melbourne after travelling the world solo for the past 2.5 years. I'm still working on a blog and photos of my travels at http://www.lucasthenomad.com , I'm soooo far behind

I like meeting people from all over the world

Movies: I never seem to find the time to sit still for that long

Music: Everything from chilled out folk music to full-on dancefloor psy-trance. My tastes are too varied to label. I do tend to get along to a lot of festivals that many would consider "full of hippies" although I dont really look the part ;)

I've seen two total solar eclipses so far, one in the Cook Islands and one in Northern Queensland. I can almost guarantee I'll see a few more before I'm done on this earth. They're pretty spectacular.

I tracked mountain gorillas in Rwanda; We got right up close within a few metres of them, it was magical!

I've worked as a divemaster on a Carribean island, leading hundreds of people around the beautiful reefs of Roatan.

I'd love to teach people some basic poi. I'm quite a strong Ruby programmer too, happy to pair with people on stuff that they're working on.