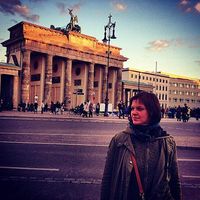 I think it's difficult to describe myself. How do you build a person in words? But I generally consider myself a very open person, to friends and strangers. I'm always in for an adventure, a nice talk or just a relaxed evening.

I have hosted and surfed, and both were amazing. I love the idea of going somewhere and having no idea what you're going to do or who you're going to meet. It turned out great the last time, so I trust it will do the same on the next occasion.

I surfed: a week in Portugal, three weeks in San Francisco, a bit in Ireland.
I've hosted: loads of times.
I've participated in many CS events, including CouchCrash 2012 in San Francisco, which was seriously the best thing ever.

Open to anything! From alternative rock music to 16th century choir pieces. Currently very into musicals, and I'll soon be in one too!

Same for books, too much to list. If I have to name some favorites there, it would be Salinger, Joyce and Murakami.

Swam with whalesharks. Found family in places you would never expect them.

Anything I have, I'll be willing to share with you :)