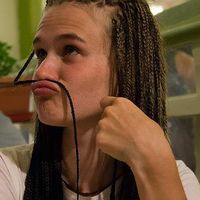 I am drifting through the infinite time as does anyone; on the way, I catch hold of many a beautiful thing. I have a phrase that I've been running over and over in my head - "As I moved ahead, occasionally I saw brief glimpses of beauty" (it's a ctually a nameo f something; check it out!). I think that sums up a life really well. What's for me, I also move ahead looking for those moments of beauty - through interaction with others, nature and art.

I realized recently that CS has been quite a part of my life. I've met some wonderful people here, have carried beautiful friendships on, helped and was helped. I do believe that CS does have a spirit despite everything that has been going on here in the pst few years, and it's important we keep it alive (hey owners, free CS, maybe?).

I am looking for connections - and even though I wouldn't mind helping out in a an emergency if such help is indeed needed, in all other cases I'd appreciate it greatly if you'd read my profile before sending me a request, as I will surely read yours! :) If you feel that we won't get on, or that you are looking for a place to stay simply (which is okay and understood, but a little appreciation goes a long way), then perhaps it's better to give me a hard pass and move on to the next guy ;) (however, the next guy might be of the same mind, so...)

Quite sporty, I've tried out a number of things over the years, but the sum total shows that I lean strongly towards martial arts and the simple joys of controlled falling, i.e. jogging and cycling.

Lately have been engulfed more and more into the high-sky abyss of arts, trying my hand in this and that... and anything to do with cinema just gets me. If you are from the world of cinema ... oh won't you be welcomed!..

I took up photogrpahy and cinematography recently. I'd find any advice invaluable :)

I figured recently that I like dancing in clubs - so if you're up for it, we could go a place or two.

I read a lot and in a rather hectic way, preferring long reads to short ones, although I figured that if it's a matter practical, point interaction works better, here and now, than a whole book with theory and history (sorry, old me, life had to have its say).

Music: Placebo; Tricky, Radiohead, Muse, The Dead Weather, Nick Cave, ... and lots of others. I'd actually put Tricky forward, as he's been there for over a decade now. Now what a musician!

Movies: I am a movie buff and no mistake. like cinema d'auteur, quiet movies, movies that make you sit up and take notice, movies that challenge your mind, movies that call for emotional work or leave you vibrant with the sense of life (hmm, sums up Paul Dano's filmography, it would appear). My favourite directors would be Paul Thomas Anderson, Lynne Ramsay and Sofia Coppola, but those are just ever-shining guiding lights... there's many whose work i enjoy immensely as well: Gus Van Sant, Spike Jonze, Kelly Reinhardt, Stephen Frears, David Kronenberg, etc., etc...

Books... too many to list, I'm all in though for 20th century literature. Love Terry Pratchett, Gesse, Kurt Vonneghut. Latest discoveries and delights included Inherent Vice by Pynchon and Far From the Madding Crowd by Hardy.

Went, despite all odds, to the other end of the world when I was really young, spent two months there, came back in one package and with many memories made.

Anything that we'd find in common or vice versa and engaging for both parties.