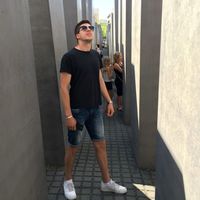 I tend to live in the moment. I don't always make it, but hey I'm trying!

From time to time I drink enough to remind myself that life is too short and that we're all gonna die in the end.
So I'm trying to make this stay on Earth as fulfilling as I can. To create memories and be remembered.

I work as a teacher in the IT industry and I'm also running my own startup. I dropped out from University after figuring out that I don't need it in order to pursue my dreams.

Back in the days I was playing basketball, then I moved to the UK and discovered rugby. When I have time I attend or watch different games. That usually the only reason for me to turn on the TV!

And iSocialize! A LOT. Well, you're just reading my profile on Couchsurfing, so I guess now it makes more sense. :) Also, iParty! Won't complain if you're up for some drinks in the bar/pub and then hitting a club.

If you want me to host you and spend time with you, at least be decent enough to read my profile. And feel free to ask anything you want!

Because I believe in utopia. And Couchsurfing represents one piece of it.
The idea of someone hosting you, treating you like a friend and not asking anything in return - it's amazing, isn't it?

I don't host everyone and I don't host all the time. That would be really inconvenient.
Sometimes I'm just tired, have too much work or simply want to have my own peace for a few days. Sorry, but I probably won't host you at that time.

On the other side, if I do accept to host you that means I will do my best to make your stay great. The idea is for all of us to enjoy and I'm driven by that idea.

Since 2008 I've been thinking of buying ukulele and learning how to play it.
For some stupid reasons I was postponing that until January 2016.
Now I play ukulele and I might think about playing while you're at my place.

Sports. I watch all kinds of sports. Not a big fan of anything specifically.
OK, maybe basketball and rugby.

Alcohol. No seriously. I'm not an alcoholic, but I tend to drink quality drinks and enjoy in them. I always have a bottle of scotch in my flat and a bottle of wine.
Yes I drink beer as well.

I really don't bother prioritizing these stuff...
It depends a lot on my current mood, atmosphere, time of the year, air humidity and other shit.

I listen to pretty much any kind of music, more or less.
Prefer TV shows, but films are fine as well.

Maybe I read books, maybe I don't. It's none of your business.
If you specifically want to talk about books, well ask me and we'll see.

Combine:
years of extensive travelling; me being seriously in love with a few girls that were not from my home country; an urge to be whatever I want, whenever I want; belief that I can do always do things, only if I want it enough;

Combine it all and you might come up with some of the amazing things I've done. If not, just ask!

I tend to share stuff. But not everything. One simply doesn't want to share some things. But everything else is fine.

Memories. And tequila. I always share tequila!
Just not too much tequila, because then I can't share memories.