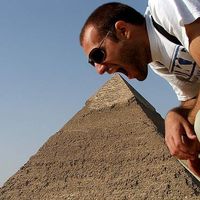 I work for a social impact strategy consulting firm on international development projects, based in DC. Have couchsurfed quite a bit and loved it!

That rug really tied the room together.

Most of my activity came during two years living in Jordan giving people a place to rest their feet as they transited between Petra and Israel or Egypt, and also staying with others as I traveled through the Middle East with my girlfriend.

Hosting people in Aqaba and surfing all around the Middle East, mostly. I hosted great people from all over the world, and surfed in Israel, Lebanon, Palestine, Syria, and Turkey. I recently also surfed in Serbia. The highlight was probably surfing with three different people in three different parts of Istanbul in one trip, which gave me an incredible range of perspectives on the city.

I took some time settling into D.C., but am looking to get back involved with CS.

Dave Eggers, pop econ and psych, int'l affairs lit. Right now for a favorite I'd have to say A Confederacy of Dunces.

I tried to eat 20 tacos in one sitting while in high school and almost succeeded.