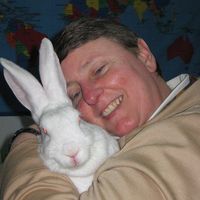 Trying to be a good teacher

I have visited most of the major tourist attractions in China, with the exceptions of the mountains (I prefer history, culture and architecture over scenery), Tibet (scared of the altitude) and the Yangtze River Three Gorges Cruise (I only want to go on the five-star boats, but I can't afford them!).

Do unto others as you would have them do unto you.

* My podcast: "The Ten Questions ESL Podcast"
* Cycle touring (dreaming about it; I have taken a couple short trips about seven years ago, but now I've gained too much weight and have a sore knee sometimes and can't ride a bike, sadly)
* Bike races (watching and reading about them)
* Rabbits (I had one for 2 1/2 years when I lived in Xi'an)
* My amazon.com Kindle e-reader (love it! I read so much more now)
* World religions
* Psychology (I have participated in workshops in Singapore for Solution Focused Brief Therapy, but haven't earned a certificate yet)
* Languages
&gt; Intermediate level: Spanish and German
&gt; Elementary level: French and Chinese
&gt; Beginner: Norwegian, Italian, Dutch, Russian and Arabic
If you are a native speaker of any of the languages above ask me about the possibility of exchanging language lessons for free meals.

BOOKS: James Michener is my favorite writer. He writes these really long historical novels. I also like spy novels and anything by John Grisham. The best spy novel I've ever read is Shibumi by Trevanian. The main character learns the Basque language while in a Japanese prison in WW2. I read the Bible every day.

MUSIC: I mainly like dead, white, European males (Beethoven, Mozart, Haydn, Vivaldi, Verdi and Puccini). I sometimes listen to country or a cappella gospel or big band jazz. But most of the time when I'm using my iPod, I'm listening to a variety of podcasts from iTunes.

MOVIES: Romantic comedies, dramas, action-adventure (if there's not too much violence). Can't tolerate horror movies. A CSer from New Jersey introduced me to my first and last zombie movie. Never again.

The July 22, 2009 total eclipse of the sun! I've never seen anything like it. I was in Chongqing, China for the eclipse.

*** Warning visitors to China to beware of "students" who want to practice English with you. In Shanghai they may be trying the Tea Ceremony scam and in Beijing it's the Art Student scam. ***

**Also, if you take a taxi in Nanning, the drivers add three yuan to the fare. This is for the fuel surcharge and it doesn't mean they are cheating you.**