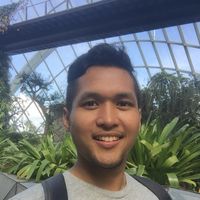 to live this life to the fullest by travelling, enjoy meeting new people and learn new culture

Live this life by enjoying, learning new things, and sharing ideas, thoughts, love with the people around me, so that I know what to pass down to my generations in the future!

Live life like its your last every single day!

I like meeting new people and make new friends

I first learned of CouchSurfing through a friend of mine who was hosting surfers during my visit. I joined them for some sightseeing and enjoyed the whole experience!

I am interested in driving along the coast, doing sports and doing something a bit of adventurous, meeting people and discovering new stuffs!

I am a universal music listener, i love adventurous, science-fiction and horror kind of movie. I love books that related to the journey of someone's life that is motivating and inspiring..

1. Went up to the TOP of Eiffel Tower in Paris at night during the coldest winter. While taking pictures it got rained! Hahaha

2. Did my first Tower Ride in Movie World, Gold Coast (678 metres high and a TOP speed of 64 kilometres an hour)

3. Went up to the TOP of Tokyo Metropolitan Government Building to see the whole view of Tokyo’s skyline

4. Went up to the TOP of Rockefeller Centre to view the whole of New York City scenically

those are some Malay greetings :-D

Step off in your comfort zone that’s the best way to challenge yourself.

My inner child of curiousness, would want to know their living life and their culture