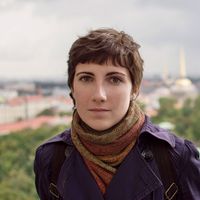 I guess I'm just a human being - in a way average, in a way unique - like everybody else. I believe our closest friends, those who know us best, with all strengths and weaknesses, are the ones who can tell.

I'm hoping to meet new people from around the world - get to know more about their life and culture, hear their stories and share what I can about mine, learn from them and, hopefully, teach them something, too.
Despite everything that's going on in the world and international politics, despite all the differences in faith, nationality, culture, personal characteristics, etc. basically, we are all one.

I've overcome some of my fears and insecurities and become more open to the world and people around. Hope to keep growing and learning

Professionally, I can teach English (well, I'm not a native speaker, so it can be relevant for those who are not fluent/confident enough about their knowledge). Also, my native language Russian :)

I have some painting/drawing skills that I can share as well.