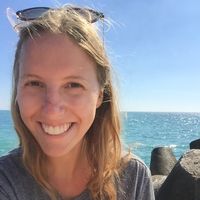 I know it’s a cliché but I really love traveling, and I do it whenever there’s time (or no time or money but I do it anyway :D)
At a certain point in my life I just figured; who knows where I’ll be ending up later in life, maybe I’ll be stuck at work 24/7, so better seize the opportunities I have right now and go see as much of the world as possible!

The best way to explore new places is by hanging out with people who actually live in these places - at least that's my experience so far and that's how I would like to continue when traveling! :)

Obviously traveling and everything that comes with it, such as learning about new cultures and especially languages, confirming or destroying cliches people have about my culture and the other way around, trying out new food (!!),
otherwise I really like to paint and I love going to open airs or music festivals :)

All sorts of electronic music, especially for going out. Otherwise some alternative/indie stuff.
With movies and books it’s just too difficult, there are waaaay to many good ones. Atm I’m mostly binge-watching lots of Netflix shows to be honest :D

My erasmus semester in Malta - it’s been the best time of my studies so far and if time travel was possible, I wouldn’t hesitate for a second and do it all over again!