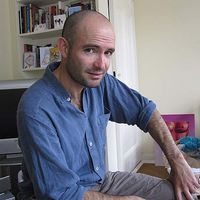 I'm English, but I grew up in Ireland, and now I live in Holland. I lead a pretty quiet life here in Amsterdam. Not the kind of guy to stay with if you want to party the whole time you are in Amsterdam, more the cup of tea and have a chat kind of guy.

I don't have one.

Welcoming new visitors to Amsterdam, especially those interested in art and culture and urban development - dope/red light tourists not particularly welcome. By the way, you will notice that nearly all my guests so far have been female. I'd just like to make it clear that men are also welcome, so I look forward to hearing from everyone!

Had six visitors so far and enjoyed all; also made four visits, with only one (in Eupen, Belgium, where it can get cold in February) being not very positive!

At the moment, reading, trying to learn French, environmentalism

I've been to Paris twice, but I've never been to Meath.
Had a fire in my apartment September 2010. That was pretty freaky.

Lived in Africa when I was a kid (but I don't remember it much).

It depends on who they are.