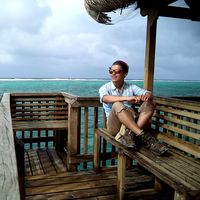 Currently doing a specialization on vaccine development in France. Passionate about traveling, medicine and adventure. Often a rookie musician, frustrated writer and compulsive reader. Very interested in psychology, medicine and literature. I enjoy dancing, sports and going out, specially to explore the nature. I'm very spontaneous, a dreamer but not a fanatic and I don't believe in radical ideologies.

To meet people from all over the world, learn from them, share perspectives, interests and philosophy of life.

"Oh great creator of being
Grant us one more hour,
To perform our art
And perfect our lives"

One day I woke up, bought some flight tickets and started traveling with a 30lts backpack. No plans, no time line, no limits. In 9 months I visited 50 cities around Europe, north Asia and Russia. I did it with a tight budget, small amount of stuff and hitchhiking most of the time.

I helped to found a non-profit that provides free medical attention in the rural Guatemala. He-he.org

I attended 17 deliveries at the hospital during a 36 hours shift.

Being the only Guatemalan who lived in Sierra Leone during 2018

I met the Orthodox Christian Pope and Patriarch of the Great City of Alexandria and All Africa Theodore the II and he sang me the happy birthday!